Readers of my MacKenzie series will be familiar with a little red dog fox named Somerled. He is Devorgilla’s magical helpmate and first appeared in Kenneth’s book, UNTIL THE KNIGHT COMES. Since then he makes regular appearances in my Scottish medievals, assisting Devorgilla with her meddling and mischief. Because Somerled is so special, I wanted you to meet him.

Somerled, you see, is quite real. 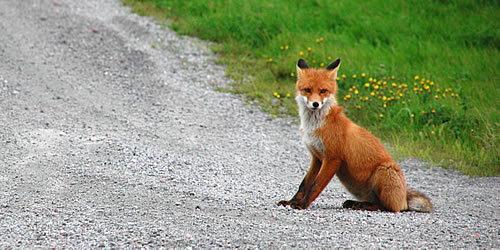 Or, at least, the little red fox that inspired him does indeed exist. I encountered him when hill walking in the Highlands. He was just there suddenly, standing in front of me as if he’d appeared out of nowhere. I stared at him and he stared back, looking at me with amazingly earnest yellow-gold eyes. They were very intelligent eyes and I felt as if he were looking right into my soul. And then he was gone. Poof! He vanished quicker than a blink. So fast, in fact, that I wondered if I’d seen him at all.

He seemed magical to me.

And I couldn’t put him from my mind. Thoughts of him stayed with me even days later when I was flying home from Glasgow. I knew then, as my plane carried me across the Atlantic, once again in the wrong direction, that the fox needed to be in my books. And so Devorgilla’s little friend, Somerled, was born.

Sadly, I was startled to see him when he appeared before me (in the hills of Glencoe) that I didn’t think to snap his picture. Recently, I discovered the wonderful photographic blog of a Norwegian man named Ivar Ivrig.

In addition to Ivar’s stunning photographs of his beloved Norway, he sometimes posts wildlife photos. It was here, on Ivar’s blog, that I saw these three photos of a darling red dog fox who looks exactly like my little Somerled. Truly, this fox could be the one I saw in Scotland.

And I am ever so grateful to Ivar Ivrig for kindly allowing me to post these photos of the little fox he happened across during one of his daily walks in his beautiful homeland. Thank you so much, Ivar!